‘She would be elated.” Clinton author’s children’s book published posthumously 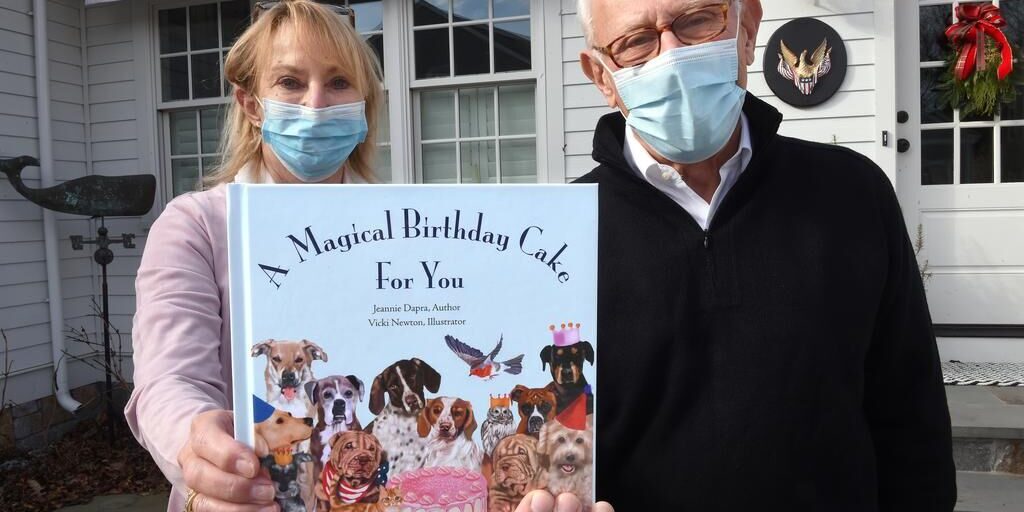 Published in the Shoreline Times.

CLINTON — Jeannie Dapra’s passion for the written word is manifested in her copious musings on everything from family trips, holidays and special occasions.Even the family’s furry friends have been put in the spotlight in her recently released children’s picture book “A Magical Birthday Cake for You.”Yet, just prior to publication of this Clinton author’s second book, she succumbed to cancer on Aug. 21.

For Jeannie Dapra’s husband, Rich Dapra, reading her work, posthumously, is bittersweet.“It’s pretty emotional,” he says. “But I’d rather have that, than not.”“It’s a great remembrance for my grandchildren, my children and me,” he adds. “A Magical Birthday Cake for You,” is published by Seacoast Press, an imprint of MindStir Media LLC ($17.99) and is available at the following local businesses, as well as Amazon — Breakwater Books and Just Hatched in Guilford and Harbor Books and Saybrook Home in Old Saybrook.

The whimsical picture book features two dogs, Trout and Trippet, who band together to celebrate a birthday for “someone.”Tippet bakes three cakes and all his furry friends set up a backyard party, complete with party hats and balloons. “Annie the Ladybug said, ‘I wish we could sing the Happy Birthday song, but who would we sing it to?’“Trout said, ‘I know! Let’s sing Happy Birthday to ‘SOMEONE’ because every day is someone’s birthday.’”

This book is created as a special keepsake, with fill in the blanks for the date and the name of the birthday boy or girl.The proceeds from the sale of the book are earmarked for Guilford’s SARAH Foundation, serving more than 1,500 individuals with intellectual and/or other disabilities, annually.

With friendship, inclusion and kindness as the book’s themes, donating the profits to SARAH seems like a fitting arrangement. “Inclusion is important for everybody, but certainly for individuals that we are privileged to serve, and obviously isolation and lack of inclusion for individuals with intellectual and other disabilities has been a challenge for a long time,” says Ken Alberti, SARAH Foundation executive director. “That’s one of the things that SARAH hopes to help with, is to provide some opportunities to be engaged in the community for the folks that we serve,” he adds. In addition, Alberti says, the dollars generated from the book’s sales are especially appreciated, especially now as COVID-19 negatively impacts the nonprofit’s ability to raise necessary funds. “With all of our fundraising events cancelled this year we have needed to identify new ways to engage the community and seek financial support,” he says.

Rich Dapra talks lovingly of his bride of 57 years. “She was 79, she looked like she was 59 and she acted like she was 20,” he says, smiling broadly. “We went to high school together, we went to college together,” he says. “We got married in 1963, which is the year I graduated from college, went in the Marine Corps and got married all at the same time.” Jeannie Dapra was a nurse by training, but loved to write. Rich Dapra says he’s not quite sure how she came up the idea for “A Magical Birthday Cake for You,” but he certainly has some thoughts.

The two main characters in the story, dogs Trout and Tippet live in New Jersey with the Dapras’ son, Jason, and are part of their extended family. “Trout is a character,” Rich Dapra says. “I think he just stimulated it (the creativity) and actually we were there once and they left part of a cake out on the counter, he ate it. “He’s really a character,” he adds. “He’s big and he’s in your face, he’s licking. He’s like a big couch potato, but he’s a demon in the field. “That may have been the impetus for it,” he adds. “I’m not exactly sure, but it was just her interaction with those two dogs and my son’s crazy about those dogs and she likes them.”

Illustrator Vicky Newton talks effusively about this collaborative effort. “It was fun because Jeannie was fun,” the East Haddam resident says, laughing. “She made the whole thing a really creative and fun project. She was quite the person to work with. I really enjoyed her.” While Newton only met Jeannie Dapra a couple months before her death, she said that this author made a lasting impression on her. “She’s interesting in that you feel as if you’ve known her forever,” she says. “She was just the most comfortable, gracious person. I really do miss her terribly.”

Rich Dapra said after all his wife’s writing — about family trips to Cape Cod and Nantucket; holidays such as Memorial Day, Mother’s Day and Fourth of July and of course, family celebrations for birthdays, words flowed from her pen. She also contributed to the ShoreLine Times, writing a Mother’s Day piece, “Words and memories are the sweetest gifts,” in May 2019. “She usually just drafts something by hand and then she’ll type it up,” he says “It doesn’t take her long.” Rich Dapra says he had no idea how prolific his wife was as a writer until he started recently going through her work. “I’m finding books that she wrote to me after certain vacations,” he says. “We’ve been going to Nantucket for over 30 years. Once she had to go by herself because I couldn’t make it. I’d meet her in a week and she would have documented that week and the trip over. It was a 20-page book. She loved to write.”

And how does Rich Dapra think his wife would feel about the publication of the book? “She would be elated,” he says. “I think it’s exactly what she wanted and she would be out there promoting it, like there’s no tomorrow.”